We flew into Denver and drove over Independence Pass where we crossed the continental divide before arriving in Aspen.

Did you know? The water that falls as rain on the west of the continental divide flows towards the Pacific Ocean and rain that falls to the east goes towards the Atlantic Ocean.

Team Bravo! had to get acclimated to the high altitude so we did some fly fishing and hiking before the Food & Wine Classic in Aspen.

What’s up with catch & release? I was thinking River to Table!

We went for a mountain hike to the Grotto. This hike is up the mountain and has caves that never see the sun and are full of ice and snow, even in June.

American Express hosts a party every year for chefs and restaurateurs. It’s a great time to belly up with others like Ming Tsai, Hugh Acheson, Anne Burrnell & Tim Love. 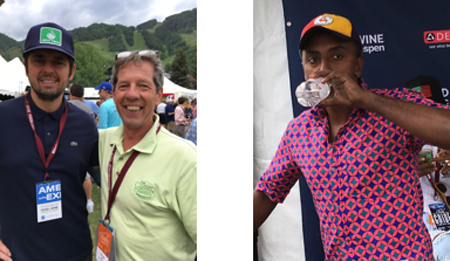 Walking around Aspen is also a great opportunity to meet and see some of the greatest chefs in the world. Chef Ludo Lefebvre (Mind Of A Chef) whose seminar was on butter “If you add butter everything is better.”

Chef Marcus Samuelsson is hydrating before a seminar. He led a 5K run in the morning to raise money for Wholesome Wave. 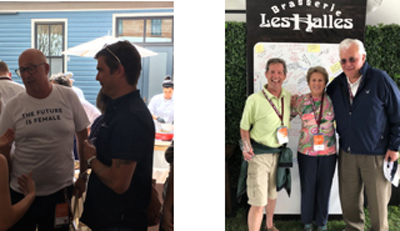 On a serious note — the past 12 months have given rise to the #MeToo movement, and most recently publicized bad behaviors by highly placed celebrity chefs. It is gratifying to see Food & Wine magazine select 7 women for this year’s Top Ten Chefs issue! There will be no tolerance for harassment or abuse in this industry.

It is noteworthy that television personality Andrew Zimmern was seen sporting a shirt stating “The future is female.”

The event also recognized the recent loss of Anthony Bourdain with a tribute wall for guests to sign and pay tribute. 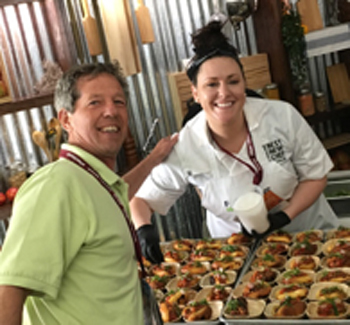 One of F&W Top 10 New Chefs is Kate Williams of Lady of the House Restaurant in Detroit. Chef Kate took a moment to greet Terry before serving a few hundred guests in the Grand Tasting Tent. 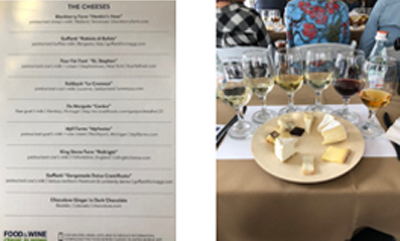 Bobby Stuckey and Laura Werlin’s “Love Letter to Napa & Sonoma Cheese and Wine” was inspired by those displaced after the October 2017 fire. All of the cheeses and wines on this list can be found in Napa and Sonoma. Laura substituted the “Taupiniere” with “Crottin” cheese, which she said is “the mother of goat cheese.” This cheese only gets better with time. Bobby paired it with the Robert Mondavi Reserve Fume’ Blanc 2013 and noted that the Mondavi Family did so much for Napa Valley. The Marin County “Mt. Tam” can be found at Whole Foods and the “Petite Truffle” at Costco. The Point Reyes Farmstead Cheese Co. also sells its cheeses online. Bobby pointed out the unfiltered 2016 Failla “Lola” Pinot Noir has low tannins and high brightness. At $275.00 a bottle, the 2014 Cardinale Cabernet Sauvignon was “luxurious.” 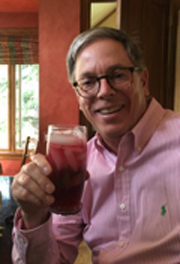 “Bottle regret” when a collector opens a wine at night but is bummed in the morning.

“Creamy cheeses bring out the tannins in the wine. Use lighter wines with creamy cheese.”

“Always taste wine first, then cheese and other foods.”

“Spices last about 6 months at the most.”

“Shake a cocktail until your hand gets cold. That’s when it’s cold.”

“First bite of chili tastes like bell pepper, no seeds or juice. Second taste has the fire.”

“Spank your basil to release the oils.”

“Throw fruit on knife. If it doesn’t catch it the knife needs sharpening.”

“Racing cars is measured in minutes and seconds and drivers need to be in control.

“Wine making is measured in years and decades and Mother Nature is in charge.”

“Always leave your butter out; not in the refrigerator.”

Bravo! is one of the 100 Best Brunch Restaurants in America for 2017 as voted…

A flight of 4 of our small batch handcrafted beers paired with 4 appetizer bites $17.00

Our small batch handcrafted beers are brewed and available only in this location to assure peak freshness.

We respect traditions of brewing and apply our passion to create flavors that match our award winning food.